Getting Older People Active and the Benefits it Brings

In England only 30% of over 75s meet the physical activity recommendations¹. 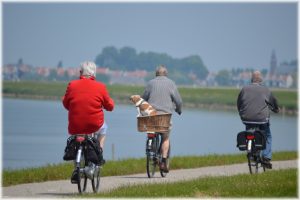 The NHS website recommends that older people should aim to complete 150 mins of moderate aerobic exercise on a weekly basis, noting that it’s better to exercise daily in stints of 10 mins or more to gain the full advantage.  They also recommend that older people undertake strength exercises twice a week to work their major muscles, examples of such exercises include activities that include stepping and jumping, carrying heavy loads or using free weights.

Additionally older people should not sit down for long periods of time. Sitting is believed to slow one’s metabolism, which in turn can affect someone’s ability to regulate blood sugar and their blood pressure.

The age group of 65 years and older is the most sedentary age group – spending on average 10 hours a day either sitting or lying down.

So it’s no surprise that as people become older its vital that they remain active – the benefits are multiple; to remain healthy, independent, ensuring that the most simple jobs such as going to the shops remain easy and people are able to continue to do the things that they enjoy.  There has been recent evidence that suggests that people who lead a more active lifestyle even have a reduction in the risk of falling as exercise improves balance and coordination.

Research has shown that people who lead a non-active lifestyle age faster, this is due to damage of telomeres that are present at the end of chromosomes and prevent the aging process.

Minimal physical activity can also reduce muscle strength, joint structure and functioning, increasing the chance of arthritis and osteoporosis. Being inactive can also have an effect on the emotional wellbeing of old people as it reduces the brain activity making someone less reactive which can lead to depression.  There are many other health related problems that can be a result of becoming inactive. 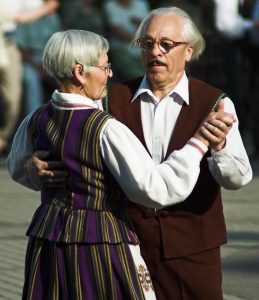 There are lots of ways that older people can stay active, it’s not just about exercise classes that make you sweat. Being active encapsulates any activity that requires physical exertion, which could be a fast walk in the park, to a ballroom dance class to an hour in the garden mowing the lawn. Any physical activity that raises your heart rate.

As exercise release endorphins, the emotional benefits it can bring are numerous. Exercise can improve a person’s mood, can help someone relax and can help reduce stress, plus it can give  you more energy and be a good way of meeting people and socialising.

It’s never too late to start exercising and enjoying the benefits it can bring. However, when starting exercising from scratch its important to listen to your body and increase the amount and intensity of your physical activity in stages.  For further ideas on exercise for older people click here.

CareLineLive, part of MAS Group, is an award-winning care management system for home care agencies. CareLineLive is the first choice for many home care agencies, setting a new benchmark in care management with systems built for purpose. Committed to their customers, CareLineLive increases efficiencies, revenue and decreases costs whilst providing businesses with more time to care; for their business, their staff, and their customers.  Visit us at www.carelinelive.com, follow us on Twitter @CareLineLive, on CareLineLive or LinkedIn at www.linkedin.com/company/careline-live
Care Management Systems
Carers
Home Care Agencies
by Sally Griffith
Marketing Manager